Over the past eight years coworking has gone from being a social movement to being a bona fide industry.  As asset owners and real estate professionals learn more about the significant rent arbitrage potential, and as investors and lenders become more comfortable with the risk profile of coworking businesses, the floodgates have opened up.  VC firms are on board, as are some REITS. No longer are people asking, “Is coworking an actual thing?” Now they are asking: “How big will coworking be?” This is great news for many parties. For those of us who have been involved with the industry since its infancy, there is much to celebrate in coworking’s maturity.

Why has coworking been so successful?

At the risk of being atavistic and naive, we believe that it is easy for ‘the industry’ to overlook what it was (is) that made coworking so compelling in the first instance.  One could argue, and some do, that the essence of coworking- defined as a particular type of work experience– has been lost in the process.  But what is this experience, and why does it matter?

Let’s start with some definitions.  Generally speaking, coworking can be defined as “community-oriented work environments where freelancers, startups, and corporate employees work on their own projects in shared workspaces, where they belong as members (similar to a gym membership).”  Not everyone will agree with this definition, but broadly speaking it hits the highlights. Still, we think that it misses the mark.

Coworking at the experiential level 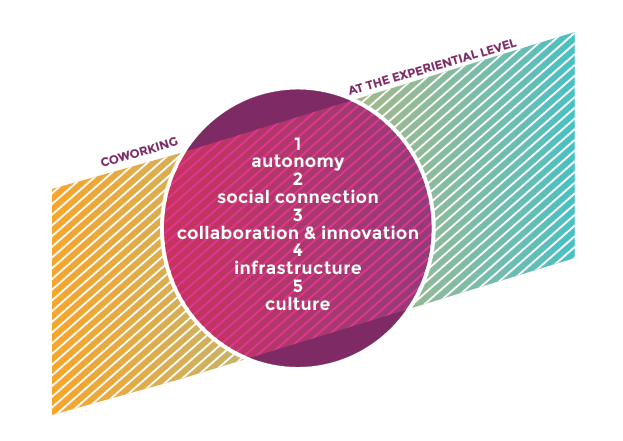 Prior to being transformed from purely open and collective work environments (at big tables) to endless hallways of highly monetized private glass offices offering workers 35-40 sq ft of workspace, coworking offered something that was truly unique at the time.  We talk about this with a touch of sadness, as in today’s market the demand for open spaces (i.e. coworking without private offices) is in decline pretty much everywhere (with a few exceptions here and there). But the experience of coworking is worth remembering, because we think there is more to it than maximizing revenue per square foot.

As a counterpoint to working in and for a company, coworking offered participants freedom.  Unlike a traditional company job, folks who showed up at the coworking space to work chose to be there that day.  They could have stayed home or worked at a coffee shop if they wanted to.  The psychological difference of this is huge. We think that empowering knowledge workers to work when, where, and how they choose is essential to the coworking experience.

Because coworking originated as a workplace solution for freelancers, the spaces became social centers where otherwise isolated workers could develop friendships and social ties.  Over time these connections became quite real and meaningful. Unlike the obligatory relationships that are often thrust on employees in companies, where we are bonded with one another through trust falls and zip lines, these relationships had an organic quality to them that was refreshing.

A friend of ours, who was a member of a coworking space in NYC a decade ago, tells the story about how he popped out with some friends for an early dinner, and by the time he got back to the space a group of folks had not only envisioned a new business idea but had bought the domain, built the website, and launched the business.  When creative and energetic people cluster and work according to their own rhythms, crazy amazing things can happen.

In the early days of the movement freelancers greatly benefited from the co-presence of others who had similar needs for support and help.  Working as an independent freelancer is a tenuous journey financially for most. The extent to which members passed on leads, gigs, referrals, tips, and technical assistance went a long way in keeping fellow members ‘in the income.’

The overall shared experiences of coworkers who work together over a period of time in fact create a new kind of cultural environment.  This is not company culture, nor is it the culture necessarily of one’s neighborhood or family. Often referred to in coworking circles as community, we like to think that the communities of successful coworking spaces also become meaningful cultures that enhance members’ overall quality of life.

One of the more interesting and exciting things to occur in the coworking industry in the past few years is the increasing level of corporate participation.  Lots of household name companies have employees who now cowork: Dell, Samsung, Accenture, HSBC, Silicon Valley Bank, Salesforce, Merck, Google, Microsoft, Marriott, IBM, Amazon, among others.  If, however, “corporate coworking” devolves into isolated teams being required to show up in tiny glass offices on a fixed schedule, then this obviates the experiences of coworking.  It is probably too much to expect that the benefits of traditional coworking, as experienced by freelancers in the early days, can be easily transferred to corporate members, but we think it is worth exploring.

Above all else, coworking is about the day to day working patterns and relationships that coworkers organically develop over time.  Unlike standard corporate culture change programs, 70% of which fail, coworking creates a new kind of ‘culture at work’ without anyone ever using the words ‘culture’ or ‘change.  This is why we strongly believe that if companies are interested in getting the benefits of coworking- autonomy, social connection, collaboration, innovation- they should consider (re)creating the conditions of the original coworking movement.  This can be a single-company coworking campus or a multi-company space, but the freedom and ebb and flow that defined coworking in the first instance need to be in place. This does not mean all open plan offices, by any means. Recent research demonstrates that many knowledge workers flail in open plan offices.  A thoughtful, activity-based coworking solution will have plenty of private and semi-private spaces for those who want them.

Of course this requires adjustments in certain areas of company policy (such as anytime-anywhere work), and large companies will never quite get to the levels of openness and freedom as early-adopter freelancers (because of the obvious security reasons).  However, for those companies that are drawn to something about coworking but don’t know quite what that is, try to think about it from the experiential level.  How can your company create spaces and relationships where the majority of your people show up at the office even when they don’t have to?  If you can do that, then you have the opportunity to harness discretionary energy and self-motivation that you might have never seen.

Over the past decade the shared office model, represented by the coworking industry, has had a significant ...

Most of our clients seek to have both the market feasibility assessment and the financial modeling conducte...

As a project moves from a Go / No Go decision (based on the Feasibility Assessment and Pro Forma), the next...

Central to any coworking business is the software (+ hardware) at the center of the operation. We have exte...

Our operations packages entail most of the materials that an operator would receive in a franchise situatio...

Coworking is a relatively young industry, so it is often difficult for new operators to find staff who have...

For clients who need support for launch at the end of the development process, we have developed a comprehe...

how can we help you?

OpenWork is an established workplace consultancy with expertise in coworking and workplace change.